Oilfield drilling, completions and production operations introduce perturbations to the state of equilibrium in the subsurface, resulting in changes to in-situ stress.  The failure to properly predict these changes can lead to costly engineering maneuvers and grave safety and environmental consequences. 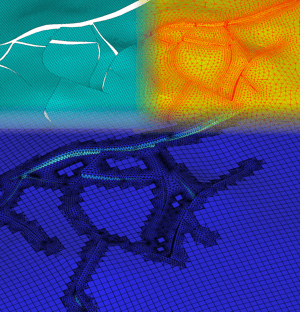 Geomechanical studies performed at reservoir scale to characterize changes in the stress field are often based on simplified 1D and 2D models, and ignore key contributors to the reservoir mechanical behavior, such as faults.  The lack of true 3D geomechanical modeling is mainly due to the technical challenge of creating 3D models capable of integrating geological, fluid and mechanical properties of the reservoir while conforming to the constraints of geomechanical simulators.

The new 3D Hybrid grid for Paradigm™ SKUA-GOCAD™ combines a reliable 3D representation of the subsurface with state-of-the art mesh for geomechanical finite element computations.  This grid accurately honors geological features, with no unwarranted simplifications, and is optimal for geomechanical simulations to assess the reservoir response to drilling, completion and production.

Similarly to Geologic and Flow Simulation grids, the new grid is constructed directly from the underlying SKUA UVT structural model. It contains a mix of structured and unstructured cells. It is dominated by structured hexahedrons away from faults where less detail is required, resulting in higher computational efficiency. Along the faults, it is made of tetrahedrons to capture geometrical detail and enable accurate finite element calculations for complex faulting systems. Both structured (hexahedrons) and unstructured (tetrahedrons) cells conform to stratigraphic deposition boundaries. At the interface between the hexahedrons and tetrahedrons in a given fault block, shared nodes ensure initial stress equilibrium and displacement continuity. Nodes are disconnected between fault blocks, allowing sliding movements along the faults.

Beyond geomechanical simulations, this new gridding technology can be used in next-generation flow simulators, enabling a coherent representation of the subsurface to simulate both fluid movements and geomechanical effects.  It is made possible thanks to the SKUA UVT™ Transform™ and its robust chronostratigraphic parametrization of the subsurface.

The Hybrid grid technology will allow engineers to routinely include the effects of stress changes during production and increase confidence in development plans.