The Orinoco Petroleum Belt is a vast area rich in heavy and extra heavy oil located north of the Orinoco River in Venezuela. This reservoir is believed to hold the largest heavy oil accumulation in the world. One of the most strategic challenges faced today by PDVSA (Petroleos de Venezuela, S.A.) Petroindepedencia, the state-owned oil and natural gas company, is turning the Orinoco Belt into a driver for economic, social, industrial and technological development for the country. 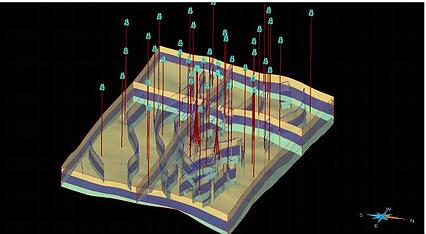 The aim of the PDVSA and Paradigm teams was to model the reservoir’s properties in order to perform an efficient analysis and provide a reliable prognosis. For this purpose, Paradigm used its SKUA-GOCAD™ and Stratimagic®/SeisFacies® software to create an accurate subsurface 3D model representing the lateral and vertical facies. The following workflow was followed:

1. From the available 2D/3D seismic interpretation, a structural and stratigraphic model was built using the pillarless technology embedded in SKUA-GOCAD.

2. To map the facies distribution, a seismic facies volume was generated from several poststack seismic attributes, such as signal envelope, amplitude and RMS frequency. The interpretation of the channels was facilitated by the use of this information rather than calculating each attribute separately.

3. A fine 3D geologic grid was built. With SKUA-GOCAD, faults are discontinuities and not pillars: Cells are cut by faults, keeping the same indexes on both sides of the fault.

4. Facies logs were blocked and the seismic facies volume was transferred onto the geologic grid.

5. As the distribution of the facies corresponds to what is observed in the seismic data and calibrated at the wells, reservoir properties can be propagated accurately. Quality control of distributed properties was performed by creating a probability index cube.

6. The geologic grid was upscaled for dynamic simulation. The reservoir properties were upscaled in the simulation grid. Various grids were built for each horizontal well to evaluate the volume of oil per block.

7. To estimate OOIP, a probabilistic-based methodology was performed, using Paradigm Jacta® to generate optimistic, most probable and pessimistic scenarios of the 3D geological model.

The Paradigm team provided specialized training and mentoring in the main workflows needed to successfully complete the project. Ongoing support was provided, both onsite and by email and phone.

The model built using the Paradigm platform honored the medium heterogeneities, matched the production capacity of the reservoirs, and enabled PDVSA to measure the associated uncertainties in the results. It was possible to generate several realizations through combining geostatistical methods with propagation trends in order to estimate the risk associated with drilling in the new locations. The results were outstanding: 95% correlation with the wells that are currently being drilled.

Efficient workflows, robust numerical methods, a user-friendly interface, probabilistic calculations, and compatibility with other vendors’ software all contributed to the successful use of SKUAGOCAD as a tool for generating a quantitative basis of PDVSA’s exploitation plan.

“While we had a lot of good input data, we did not have a robust software or hardware platform with which to successfully create models that would represent the real stratigraphic and structural configuration of the subsurface. SKUA-GOCAD allowed us to efficiently integrate all the available data in simple and convenient workflows, and generate key tools to identify, characterize and produce in the zones of interest,” said Kenia Salazar, Simulation Engineer – Geomodeling, at PDVSA.